The final images- the moon pendant, Princess Taniu with her golden hair, and a warmer autumnal tinge to the landscape. Many thanks to photographer Ian for amazing work!

The lettering is a very crude attempt by me- ultimately it will be left to designer Kate to work on the layout, typography and manipulation of all the elements.

However- you still have a chance to win one of the very first copies of the new edition of Bride of the Spear- by leaving a comment on this blog, or on Trifolium Books' or Kathleen Herbert's Facebook page.

I'd be particularly interested to hear what potential readers have to say about the moon pendant, since I made it many years ago for Kathleen- to celebrate the original publication of the trilogy.

PROGRESS WITH THE COVER

Thanks for the comments so far- here is my very rough mock up of what the front cover might look like: 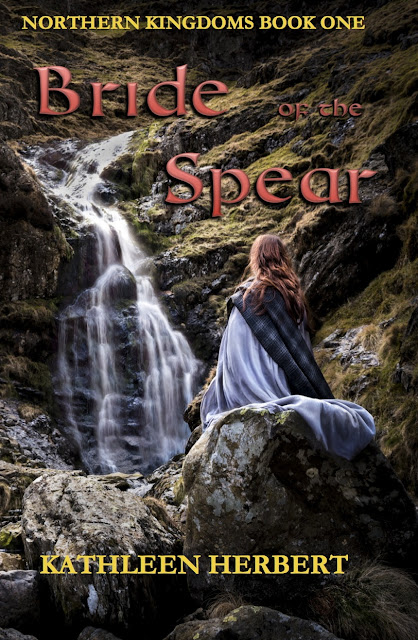 COVER, COMPETITION AND THE LIEBSTER AWARD 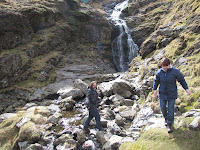 Given the traumas I went through searching the Lake District- on line and on foot- for the waterfall which exactly fitted Kathleen's description of the magical meeting place of Taniu and Owain, the choice was eventually easy.

The relevant passage in the book:
He looked up and saw a figure in a grey gown, gold hair streaming across its shoulders, watching him with wide grey eyes. It was as if sunlight, clear stream and grey stone had shaped themselves into a girl. He had the wild thought that the Goddess herself, the Lady of the hill circles and the holy springs, had risen from the stream to his aid.

The beautiful and very accessible Moss Force at the top of Newlands Hause was admired by Coleridge-
It is so near a perpendicular that it would have appeared to fall--but it is indeed so fearfully savage, & black, & jagged, that it tears the flood to pieces--and one great black Outjutment divides the water, & overbrows & keeps uncovered a long slip of jagged black Rock beneath, which gives a marked character to the whole force. What a sight it is to look down on such a Cataract! 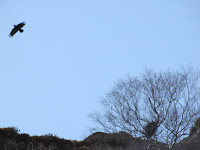 The photo shoot went well- apart from Ian getting wet feet and Kathryn a cold bottom, and eventually the sun came out and the Raven cawed us his blessing.

In fact the sun became so insistent that Ian tried using the old umbrella from the boot of my car to defeat the flare. The struggle to control it and the camera landed him in the beck! 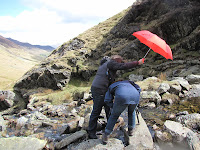 Ian is a perfectionist. He would happily do the whole shoot again, but time is pressing and I am delighted with his final photograph.

Now here's the competition bit:
A copy of Bride of the Spear, hot off the press, to the person who gives me the best feedback on the cover image I intend to use: 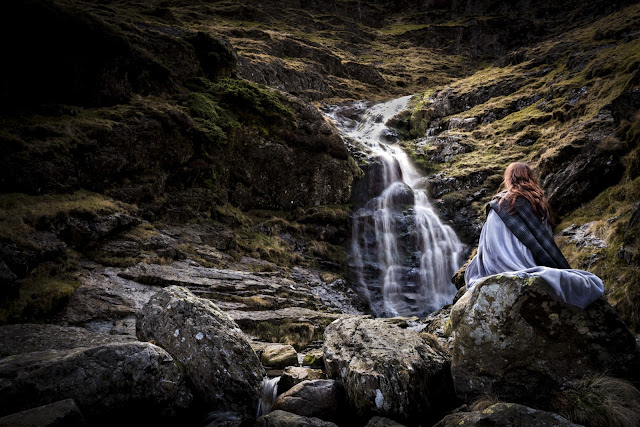 Some specific questions:
And finally, the Leibster Award! I am extremely honoured by being nominated for this award not once, not twice, but three times- something almost magical there! I have been so swamped with work since that I haven't written a post for well over a month, and so felt I really didn't deserve it. However, now that I've written this one, and now that the cover of Bride of the Spear is well on its way, I am ready to tackle my Liebster post, so thank you Kathryn Warner, Carla Nayland and Beth- my next post will honour you!