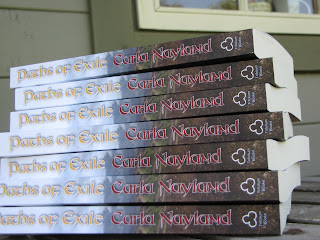 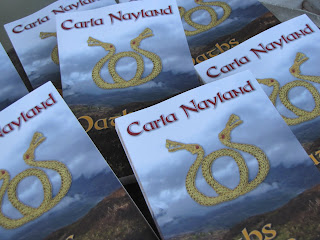 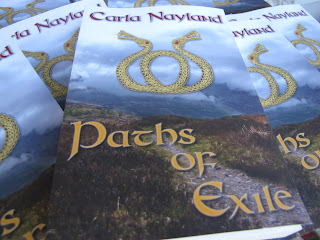 Seeing a lot of them together.... don't you just want to own a copy of this lovely new book? Several American reviews I read complained that the type-face was too small in the first edition. Not so with this one!
Posted by Connie Jensen at Saturday, July 30, 2011 No comments:

Apologies! I said earlier that you still had a chance of a free download of Moon in Leo from Reading the Past. I got the date wrong, but you can still go for a 50% reduction on Smashwords Sale Promotion.
Posted by Connie Jensen at Saturday, July 30, 2011 No comments:

Last chance to win a free download of Moon in Leo by responding to Sarah Johnson's review on Reading the Past. Take a look at Sarah's other posts while you are there. I am in awe of her knowledge!
Posted by Connie Jensen at Saturday, July 30, 2011 No comments: 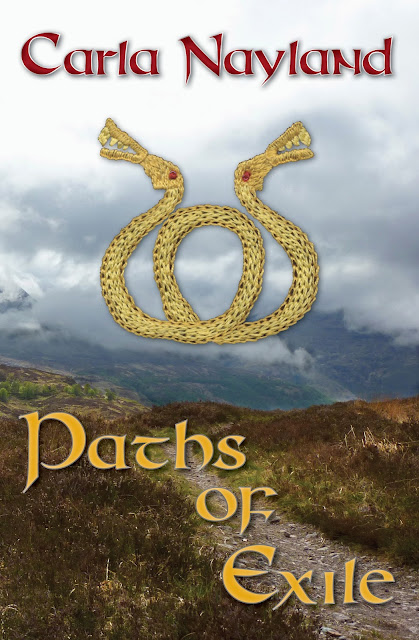 The new edition of Paths of Exile has at last appeared on Amazon here!  And, coincidentally, I sold the first copy tonight! Cause for celebration! You will soon be able to "see inside" the book on Amazon. I am delighted that Carla has decided to trust us with the new edition of this fine book, and wish her every success with it.

We will now look forward to the sequel.
Posted by Connie Jensen at Friday, July 22, 2011 No comments:

Some further sites where you can see some of the locations from Moon in Leo:

Frith Hall in Dunnerdale, the isolated hunting lodge where heroine Rosamund is kept as a prisoner:
She escapes over the fells to Coniston Hall
The quicksands of the River Leven in Morecambe Bay are a pervasive and sinister presence in the book, and they continue to be a present day danger. Who can forget the fate of those poor Chinese cockle pickers in 2004?
Towards the end of this video there is a chilling evocation of Kathleen's words as we watch a man being swallowed by the "toothless mouth" of the quicksands:
Posted by Connie Jensen at Wednesday, July 20, 2011 No comments:

Sarah Johnson is offering two free downloads with her review on Reading the Past. If you missed the 48 hour free download, you have another chance! And you don't have to own a Kindle- you can download it in several different formats, and even download a free Kindle app for your computer, phone or tablet.
Posted by Connie Jensen at Tuesday, July 19, 2011 No comments:

Email ThisBlogThis!Share to TwitterShare to FacebookShare to Pinterest
Labels: Competition, Free download, Moon in Leo, Reading the Past, Sarah Johnson

A remote land of sparkling estuaries, rocky woodlands, and wide skies that glow pink and lavender in the setting sun


"Moon in Leo takes place on the Furness peninsula in south Cumbria, England, a remote land of sparkling estuaries, rocky woodlands, and wide skies that glow pink and lavender in the setting sun.  The novel is saturated with atmosphere to the extent that the setting becomes almost a character in itself.

In this beautiful yet perilous place, wayfarers who manage to pull themselves free of Morecambe Bay’s treacherous sands can find sanctuary on Chapel Island – the spot where Moon in Leo begins and ends."

This is the opening paragraph of a new review of Moon in Leo by Sarah Johnson, on her excellent blog Reading the Past


I thought readers, especially those in North America, might enjoy seeing some pictures of the setting of the book- "almost a character in itself"

Paths of Exile is officially in print again: you will soon be able to find the new edition on Amazon. If you don't know Eadwine and his gesithas, you have a treat in store. The characters in Paths of Exile will stay with you long after you finish the book; I am sure I join Carla's many fans when I say I am looking forward to meeting them again soon!

What does the runic inscription above mean? All is explained in the new edition of Paths of Exile. 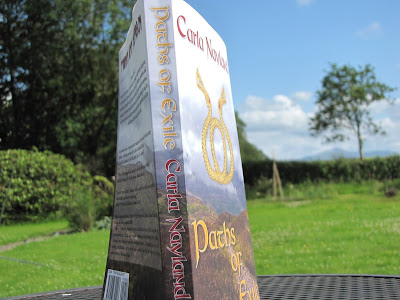 Posted by Connie Jensen at Wednesday, July 13, 2011 No comments:

The proof has arrived!

Well, and here's how it looks:

"Not recommended as teenage reading"
I find that the concentration on the text necessary when publishing a book makes me like a Method actor: I eat, sleep and dream the book.
I have recently been moving between two worlds- early 7th Century Deira  as brought to life by Carla Nayland  in Paths of Exile, and 17th century Furness in Kathleen Herbert's Moon in Leo. Both books are published by Trifolium Press- or at least the latter is, and the former will be available within the next week or two. I look forward to offering this new and slightly expanded edition to the public.
Now I have moved to a darker place: further north and deeper into Britain's Dark Ages. In Bride of the Spear, Kathleen Herbert's first novel, we are very close in time to the real Arthur, a Brythonic warlord who briefly unified the warring kingdoms of Britain against the invading Anglians after the Romans had left. Many of the characters have counterparts in the Arthurian stories. It is a period which still has an almost mythic hold over us: we gaze down the telescope the wrong way at these small bright figures, and they are still powerful and draw us in.
This is what Kathleen says:
I have always liked the stories of Arthur, as most English-speaking people do. You meet them young and are caught by them. You later start to ask yourself why certain stories hold you, and I agree with Jung that the stories which catch you permanently do represent certain movements of one's own psychic development. They yield powerful themes and figures, such as the quest, the last stand, the various faces of woman, the exploration of heroism. These motifs arise again and again in every great story.
It is some time since I read Kathleen's first book, and then I read her first edition, published by Bran's Head in 1982. It was originally a very long book indeed, but when Bran's Head offered to publish it she found they had a problem: He thought that my book would fit within his image, but he said frankly he couldn't afford all that amount of paper, so could I cut it? I found this technically a fascinating exercise. I have spent much of my life criticizing other people's precis. This was the precis of all time because the manuscript was enormous. I cut it down to what he could afford, and it came out as The Lady of the Fountain.
When Queen of the Lightning won the Georgette Heyer Prize, Lady of the Fountain was republished as Bride of the Spear in various editions, British and American with more or less lurid covers. This is one of the the most misleading: 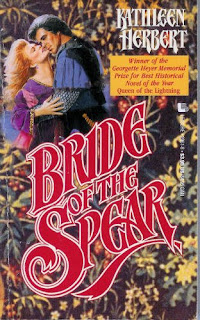 This cover illustration speaks nothing of the essentially savage world of Britain after the withdrawal of Rome, Britain after the death of Arthur, a Britain in which the hero Owain  has the cattle raiders he captures castrated or tied up in the Solway to drown. No wonder A Carson disapproved of the book in 2009:
Despite the packaging, this novel is not exactly historical romance, nor is it sword and sorcery. The author provides a glimpse into a little-seen corner of British/Celtic history, and the book is well-written. However, from the beginning the tone is harsh, and after an early scene of the young heroine being drugged and deflowered with a spear, the narrative moves on to other scenes of lurid violence. NOT recommended as teenage reading.
I have to confess that I had not remembered how dark this book is- in fact much of what Kathleen had to cut to get The Lady of the Fountain published, has been put back in. This makes it an altogether weightier and more serious book, a book that enthralls and appalls, yet has enough gleams of light  to keep you reading to the satisfyingly upbeat ending.
The quotations from Kathleen are from a fascinating interview she did with Richard H Thomson in 1991. The full text can be found here.
Posted by Connie Jensen at Tuesday, July 05, 2011 2 comments:

Waiting for the proof

All files are now uploaded to our printer/distributor Lightning Source. Now we just wait.... until the proof copy comes back. And hope it's perfect! As soon as we give it the thumbs up by email, the new edition of Paths of Exile will be available on Amazon etc. An e-version is soon to follow!

After all the frantic activity around this blog during the last couple of days- as many hits in one day as I usually get in a week- I was surprised that so few people took up the offer of a free e-book. Are people suspicious of something for free? Please tell me, and if you did download a copy, let me know what you think of it.
Posted by Connie Jensen at Saturday, July 02, 2011 No comments: