When I was a student, I lived just round the corner from the British Museum, and used to make an almost daily pilgrimage to gawp at the magnificent gold belt buckle, the shoulder clasps, the purse lid and all the other stunning artefacts from the Sutton Hoo find. It made the weekly task of translating a chunk of Beowulf more bearable, as it spoke of the real, substantial and complex civilisation that lay behind the poetry.

Many writers have also illuminated those years between the departure of the Romans and the coming of the Normans (said with gritted teeth; some of us think that 1066 was the first year of the real Dark Age) Among them are some of my personal favourites, Kathleen Herbert, Carla Nayland and Helen Hollick. Not only am I in awe of their knowledge of those years, but I appreciate their ability to make rattling good stories about them. I met Carla because she replied to a comment I had made on Sarah Johnson's blog about Kathleen's new book, and Helen got in touch with me through one of my later posts. Helen says that Kathleen gave her wholehearted support and encouragement to write about Arthur in a straightforward, but exciting way, cutting through the Medieval mysticism and presenting him as he most probably was: a strong and charismatic war leader.

So I am looking forward to meeting other writers and readers who share my love of Britain's Heroic Age, and all things Anglo Saxon. There will be a chance to buy a copy of Paths of Exile at a special reduced price- and get it signed. (Although Bride of the Spear is not yet available, I do have some copies of Moon in Leo) The other participants of the seminar will also have books to sell and sign and I have news about the republication of Kathleen's Heroic Age Trilogy (AKA Northumbrian Trilogy, Cumbrian Trilogy, Trilogy of the Northern Kingdoms) and will announce a little competition I am setting up in connection with their publication.

See you on Sunday!

History and Fiction in the Age of Sutton Hoo 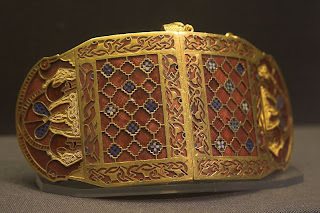 The people who made this beautiful, refined and sophisticated object must themselves have been refined and sophisticated. Why do we persist in calling the age of Sutton Hoo the Dark Ages? Let's hope we shed some light and go away thinking of the Heroic Age instead when a handful of writers gather at Sutton Hoo next Sunday to explore the links between history and fiction.

My own part will be small, but I  shall be talking about a subject very close to my heart- jewellery, and its significance, particularly in Kathleen Herbert's Heroic Age Trilogy, which I will be republishing shortly. I'd like to thank Carla Nayland and P M Sabin Moore for organising the seminar and for giving me the opportunity to take part in it. I look forward to meeting some of you there!

A ONE-DAY SEMINAR IN THE COURT AT SUTTON HOO
10 am - 5pm, Sunday 23 October 2011. Free entry.
Local authors of historical fiction and non-fiction set in Anglo-Saxon England discuss their work
Meet the authors, ask questions, join in the discussions
Book signing and sales - unique Christmas gift for the book lover in your life
No charge for admission to the seminar. Book places in advance at Sutton Hoo Reception (01394 389700), or ask at Reception on the day
Venue - Sutton Hoo, IP12 3DJ ( link to map )

Posted by Connie Jensen at Saturday, October 15, 2011 No comments:

AN UPDATE ON KATHLEEN HERBERT

Apologies for my long absence: I have been travelling in Peru- but that's another story! (Tales and musings, as well as photos to be posted on my writer's blog soon)
We have returned from our travels with renewed enthusiasm, and are looking forward to publishing our next books.We have started work on Bride of the Spear, and expect to have it available before Christmas. (Start making a wish list now!) Kathleen is very pleased about this and has now fully recovered from the traumas of breaking a collar bone and hip. She is settled in her new home, and well enough to visit old friends who live nearby, as you can see from this photo.
My next task is to make the cloak pin which will be a feature of the cover of all three books, but before that, I will be taking part in a one day seminar at Sutton Hoo. This has been organised by Carla Nayland (Paths of Exile) Details here
Posted by Connie Jensen at Monday, October 10, 2011 No comments: