Dragon head transplants: the background to the double-headed dragon in the Paths
of Exile cover design 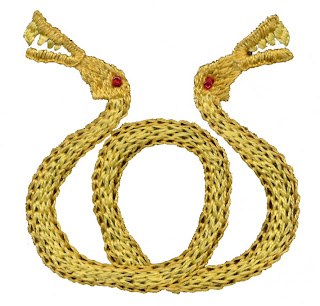 Paths of Exile is set in what is now northern England (mainly in Yorkshire and Derbyshire) at the beginning of the seventh century.  It tells part of the story of the historical Eadwine of Deira, driven into exile and on the run from a relentless enemy but determined that he will not only survive but return one day to reclaim his conquered kingdom.
The warring kingdoms at the heart of the story, Deira and Bernicia, would later combine to form Northumbria, one of the greatest kingdoms in Britain during much of the seventh century and the kingdom that gave us cultural treasures such as the Lindisfarne Gospels and the works of the Venerable Bede.  This was also the period of the great ship burial at Sutton Hoo, famous for (among many things) its magnificent gold and garnet jewellery.
For the cover design of Paths of Exile, I wanted an original image closely connected with the story, and one that would also reflect some of the colour and vigour of this ‘Heroic Age’.  Later Anglo-Saxon England was famous throughout Europe for its skilled embroidery, and that gave me the idea of creating an embroidered design for the book cover.
The dragon’s neck and body are based on a dragon I found adorning an illuminated letter in the Lindisfarne Gospels.

The Lindisfarne Gospels manuscript is one of the great treasures of Anglo-Saxon England, and was produced in Northumbria only a century or so after Paths of Exile is set.  The monks who wrote and illuminated it would probably have heard stories and sagas about Eadwine (assuming that they shared the literary preferences of their successors, who were scolded by Alcuin of York for listening to secular sagas), and their parents and grandparents would have remembered him.

The Lindisfarne Gospels dragon looks a rather placid and amiable creature, and I had a more warlike beast in mind.  For the dragon’s head, I looked to the Sutton Hoo shield, which features a fierce-looking gilded dragon complete with sharp teeth and gleaming garnet eye. 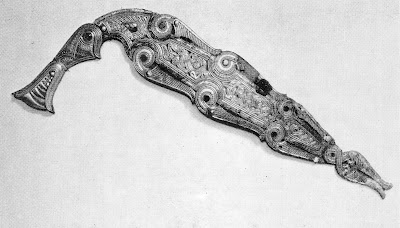 The Sutton Hoo shield is from the early seventh century, the same period as Paths of Exile.  Its probable owner, King Raedwald of the East Angles, was later a friend and military ally of Eadwine (although in Paths of Exile Eadwine has yet to meet him).  So Eadwine may well have seen the dragon-shield from Sutton Hoo in action.
I transplanted the Sutton Hoo dragon head onto the Lindisfarne Gospels dragon body, and made the dragon double-headed by taking a mirror image down the centre line and adjusting the body coils to fit.
Having completed the design, I marked it out onto cloth and set about the embroidery.   The dragon’s body is embroidered in chain stitch in two shades of golden-yellow embroidery floss to give the impression of rows of scales.  The heads are in long-and-short stitch and the jaws in buttonhole stitch.  The dragon’s eyes are in satin stitch in crimson floss, topped with crimson glass beads to recall the garnet eye on the gilded Sutton Hoo dragon.
And yes, a two-headed golden dragon does play an important part in Paths of Exile.  There’s a clue in the free sample chapters available from my website  – but if you want to know the dragon’s full significance in the story, you’ll have to read the book.
Paths of Exile will be available from Amazon.co.uk, Amazon.com and all good bookstores- bricks and mortar and online, from early July.
Posted by Connie Jensen at Monday, June 27, 2011