Now available on Amazon.com as well!

Check out Moon in Leo on Amazon UK and Amazon US. "The Search Inside" facility makes it easy for prospective buyers to get a taste of the quality of Kathleen's writing. There are now a lot of copies out there being read- I have delivered in the region of 100. It is available at both ends of Cumbria too- at Bookends in Carlisle, and at Suttons in Ulverston, as well as Bluebell in Penrith. Your local bookshop can order it through their usual channels if you ask them to get it in.If you are reading it and enjoying it now, please put a review on Amazon!
Posted by Connie Jensen at Saturday, February 26, 2011 No comments:

Read all about it!

Trifolium Books UK was featured in the Cumberland News this Friday, and sales are going very well. Moon in Leo is on sale at both ends of the county- at Bookends in Carlisle and Sutton's (formerly Tinner's Rabbit) in Ulverston.

Bluebell Bookshop in Penrith have ordered it as have bookshops in Norfolk and Sussex. Please ask your local bookshop and Library to get it in.

Posted by Connie Jensen at Sunday, February 20, 2011 No comments: 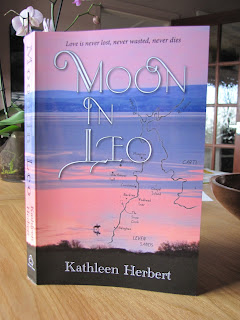 We received the proof copy of Moon in Leo today, gave the thumbs up to the printers, and it should be shipped by the end of the week!
Posted by Connie Jensen at Monday, February 14, 2011 No comments:

The Cover is Finished! 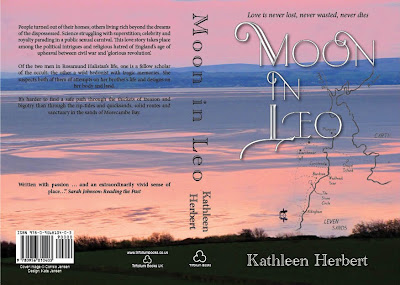 Thanks to designer Kate, who has done a superb job! This cover says so much about the book. The photograph was taken at dusk, looking across the Leven Sands from Furness to Cartmel, where several important scenes take place. We had been about to return home after a successful day photographing some of the locations in the book- tracing heroine Rosamund's footsteps. I wanted one last picture of Leven Sands, because my earlier photographs were taken when the tide was in. The sun was setting, the was light magical, and as I set up the camera, I was transported back in time as a rider emerged onto the sands. I had an eerie sense that Rosamund herself was present.
We are on track for a launch date of 14th February. You can ask your local bookshop to stock it- details below- or order it direct from us. Please leave your details on the secure form to the right of this post, or phone to ensure you get one of the first copies.
Moon in Leo by Kathleen Herbert ISBN 978-0-9568104-0-3 published by Trifolium Books UK
The price in bookshops will be £11.99; you can buy direct from us at £9.99 + p&p
Posted by Connie Jensen at Sunday, February 06, 2011 No comments: 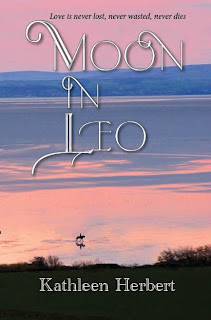 We now have a publication date for Moon in Leo: 14th February. Don't forget to pre-order your copy.

Extracts from the back of the book, and the notes at the front- to whet your appetite:

Kathleen Herbert is a scholar and a story-teller. She has written three historical novels as well as non-fiction works about Anglo-Saxon history and mythology.
In 1983, her novel Queen of the Lightning won the Historical Novel Prize awarded annually in memory of Georgette Heyer. Bodley Head published the sequel, Ghost in the Sunlight in 1986. The first novel in the trilogy, The Lady of the Fountain was republished as Bride of the Spear. All three novels are set in Cumbria, Northumbria and the Borders of Scotland, during the period of turmoil and immigration following the withdrawal of Roman troops in the fifth century.
Moon in Leo has a new setting, Lancashire over Sands, and period, but Kathleen's concerns remain the same: conflict, social and political upheaval, and how ordinary folks survive, live and love in uncertain times. She writes with the same mix of meticulous historical research and vivid immediacy.
“I write conversations and episodes when I am actually on site. Very often the place tells me what has happened. It certainly tells me what could not possibly have happened. I compose the story in my head as I move around. It is amazingly evocative.”
Moon in Leo is Kathleen's biggest novel yet and, she believes, her best. It celebrates the bawdy of Restoration Comedy, the whole range of religious belief from matriarchal mysteries through to Hobbesian materialism, and the richness of everyday life in the 1670s. We taste the syllabubs and the subtleties, the clap-bread and the fresh-caught flukes; we feel the velvets and the crisp linens, appreciate the turn of a cuff, and the rakish angle of a beaver. We sing the songs, we breathe the same air, and when the book is finished, we are reluctant to put it down; we feel a great sadness, as from a parting with old friends.
This is Kathleen Herbert at her rich best: with a book which is like the woman- intelligent, full of humour and above all, deeply humane.

People turned out of their homes; others living rich beyond the dreams of the dispossessed. Science struggling with superstition; celebrity and royalty parading in a public sexual carnival. This love story takes place among the political intrigues and religious hatred of England’s age of upheaval between civil war and ‘glorious revolution’.
Of the two men in Rosamund Halistan's life, one is a fellow scholar of the occult, the other a wild hedonist with tragic memories. She suspects both of them of attempts on her brother’s life and designs on her body and land.
It’s harder to find a safe path through the thickets of treason and bigotry than through the rip-tides and quicksands, solid routes and sanctuary in the sands of Morecambe Bay.
Written with passion … and an extraordinarily vivid sense of place…” Sarah Johnson: Reading the Past
Posted by Connie Jensen at Thursday, February 03, 2011 No comments: